‘It’s a perfectly normal question to a young man of nearly twenty-one. Your cousin Stephen seduced one when he was fourteen and she had a baby!’

Lucien started up. ‘I think you’ve gone mad. Are you suggesting I should try to start a baby with some beastly girl?’

‘In a sense yes,’ Piers’ voice was harsh, ‘at least no, not a baby, but just that you find out by having sexual relations with a girl before . . . well before you do anything else,’ he finished lamely.

‘How do you know if you haven’t tried?’

‘I don’t get erections from girls but I do from boys,’ Lucien said sounding very cross. ‘Piers we have drunk all the champagne, shall I open another bottle? Are we going to sit here all night talking about you not wanting to make love to me any more because I suppose you have fallen for some stinking black Indian princeling.’

‘Christ! Is that what you think?’

‘Well, no, but oh do shut up and let’s go out to dinner and have fun as we always do together. I’ve had another perfectly splendid season and London simply adores me and my clothes."
Posted by kleverkloggs at 3:41 AM 1 comment: 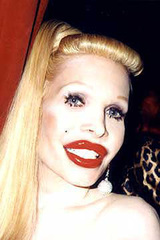 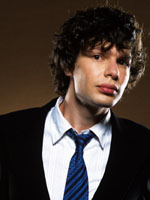 Guess I know what Simon Amstell does on his days off.

Oh give me a break, he's sarcastic enough on the television.
Posted by kleverkloggs at 7:26 AM 1 comment: 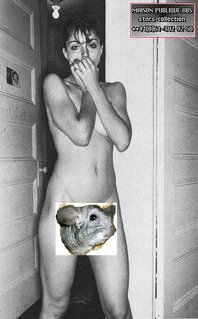 After what I read she wants to do to the baby David, and now wearing fur, is she going to lead the way for female circumcision.

And you thought people piercing babies ears at 6 month was "chavesque"!
Posted by kleverkloggs at 7:14 AM No comments:

It was a dark and stormy night

Phew! Check out the cobwebs!

Don't think this post will be of any interst to anyone but myself. Really need to renovate this blog. Tried to post on my childhood idol, namely Mrs Fanny Craddock. The biopic on her has come and gone, and I gave up trying to encapsulate the evasions and revisions of her life, she employed to create the austerity era tornado of pretension and suburban luxe that entranced postwar housewifes with vicarious high living, before everythign when beige and hessian in the 70's with Delia Smith.

No news. Apparently people hate recieving Christams cards with picture of the sender's dogs, so that photosession has been cancelled. Occasiononally bump into Madame Ex, buty have managed to escape blow by blow reports of his romance with the heterosexual Mike Skinner-alike neighbour, whose 8th kid must be due anytime now.

Checked out the vacant Battersea Power station, with it's great wall of rotting apples, and a lot of crap Chinese art, only to have it reported yesterday that it's been sold for £400 million yesterday to some irish plutocrats.

Getting so bored with myself, I've even taken to ringing up LBC 97.3.

Is everyone now at MYSPACE? I wonder. I shouldn't really blog, as I have never settled down to the one house subject . Probably delete all this, but at least it's broken the blogging ice.
Posted by kleverkloggs at 1:13 PM 1 comment: