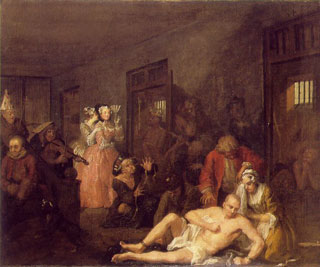 This image records how the paying public in the Eighteenth century visited Bedlem mental Hospital for entrtainment, to be amused and shocked at the behaviour of its inmates.

In the danger of repeating myself, I am still appaled by the progress of Big Brother 7. Starting with Shabaz and going all the way up to the producers. The idea of the programme is to expose the psychology of the contestants.

I AM fascinated with social psychology, more so than whether any hanky panky takes place.

But I don't see that people out of adolesence should be expected to deal with disturbed behaviour, and when I saw Shabaz mugging as a spastic person to illusttarte his use of the word imbecile, well . . . . . . I have worked with people with cerebral palsy, and they have as much going on inside as you and me. Playing tit for tat with stigmas is just not on.

It also touches on something I have learnt is poison to the social compact - paranoia. It's more contagious than syphilis. My neighbour upstairs [ever wondered if I'm house bound?] since I accidently opened a letter of his, doesn't trust that I'm not spying on him. I've recently been accused of signing for the delivery of a summons, and knowing something about why his front door lock doesn't work properly.

Now I don't trust him.

If this blog disappears, look out for news that an idiot with a red nose and too much eye shadow was found stabbed in his bed.

There's a lot in the media about the shallowness of reality tv stars, Chantelle for example, but as the Big Brother house is on display, any kind of interior life, any dissembling is seen as some kind of sinister witholding, being two-faced, on a task, etc, etc. The openess of Shabaz's behaviour seems to be taken as proof of it's triviality, not the display of a behavioural pirhana in a pool of entertainment minnows. Come on Endemol, takes some responsibility!
Posted by kleverkloggs at 11:12 AM 1 comment:

Spot the difference!
Which one is most likely to:

Have no understanding of personal space.

Accept no responsibility for his actions.

Serve up dollops of his self-contempt as a "compliment."

Out you in the most crudest way.

Hide behind accusations of homophobia.

It's too sad I know, to post on Big Brother, but when I saw an 18 year old boy try and explain to a 30 something man, that he didn't appreciate being continually touched, only to be asked if he had a problem with homosexuals, I saw blood. LEAVE THE BABIES ALONE!

Imissed last night's episode, but did catch the live broadcast, where in the middle of hiding all the hous'e food in a compost bin in the garden, the camera actually TURNED AWAY from the sad poof.

I do wonder if this man's grotesque double think as been his only defence as a gay Muslim over the years . . . . but come on, please.

It's intriguing that such an unsuitiable person, get a position to dominate the start of such a long series, as a founder member of the "Big Brotherhood." I found Makosi's interminable paranoia in the last series, wasn't helped by being given a "secret task" almost from the first episode.

Now I've vented my spleen, I can only justify my triviality with somthing wot I read on page 8 of today's Guardian. "Psychologists yesterday argued that that rumour, scandal and defamation of others is what brings us together. Professors at the University of Oklahoma had dozens of subjects 'eavesdrop' on a recorded converstaion between two fictional characters, Brad and Melissa. The group was then asked to mingle and chat about what they liked or disliked about either. The scientists found people felt closer if they agreed in their antipathy towards either Brad or Melissa. a common fondness created less of a bond."

Well, that's me covered then. Wanna be my friend? Promise I won't backbite you. Honest.
Posted by kleverkloggs at 1:42 PM 2 comments: 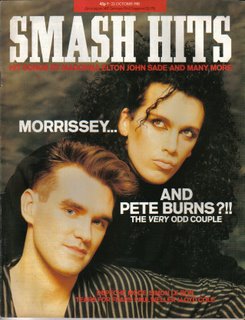 Just to show I throw nothing out. Mint condition too! From the October issue of the recently deceased Smash Hits. Just think there are people now ovulating, who weren't even born when this was first published. I'll start reading the newspaper under the carpet next. 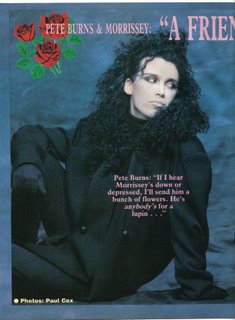 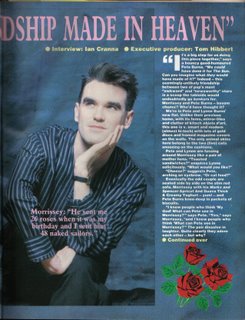 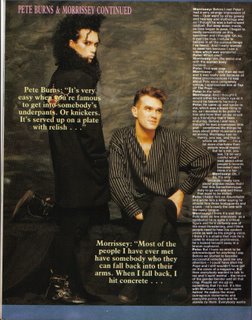 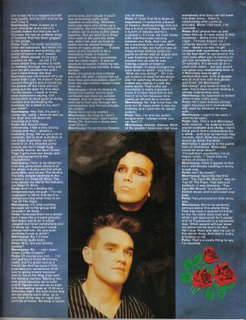