SCHOOL FOR THE INDIGENT BLIND 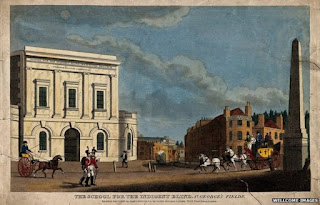 The site originally allocated for the school was required by the City of London for the building of Bethlem Hospital so two acres of land were allotted opposite the Obelisk.

The School was incorporated in 1826 and in 1834 underwent remodelling and a Gothic style edifice was added which was designed by the architect John Newman F.S.A. 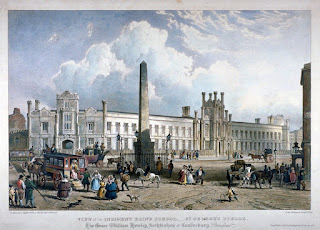 In 1901 the site was purchased by the Baker Street and Waterloo Railway and the School was moved to Leatherhead.

Posted by kleverkloggs at 2:59 PM No comments:

View of the Freemason’s School, with the adjacent buildings from the Asylum, to the Toll Gate, Near the Royal Circus. (This Charity was instituted by the March 1788) 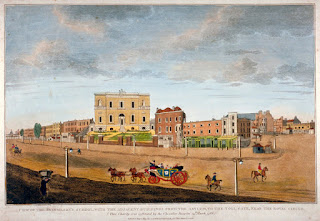 1803 - "View of the Freemason’s School, with the adjacent buildings from the Asylum, to the Toll Gate, Near the Royal Circus. (This Charity was instituted by the  March 1788)

"The Royal Freemasons' School for Girls, on the site of the present No. 28 on the north side of Westminster Bridge Road, was opened in temporary buildings rented from James Hedger in 1788. After protracted negotiations the Governors obtained a lease of the ground from the City Corporation, and a school for up to 100 children was built.
The children, daughters of masons of at least three years' standing, entered the school between the ages of 5 and 10. They were taught needlework and domestic subjects and every effort was made "to impress strongly on their minds a due sense of subordination, in true humility and obedience to their superiors." No child who had not had the smallpox or who had any defect or infirmity was admitted. The girls were apprenticed out at the age of 15.

The building in St. George's Fields was in use until 1852, when the school was moved to Wandsworth." 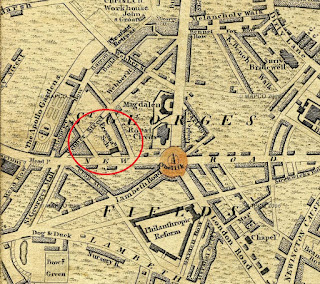 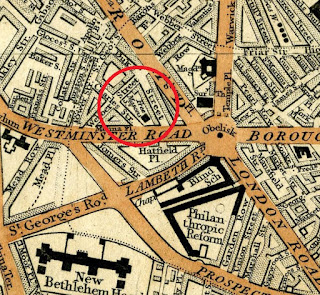 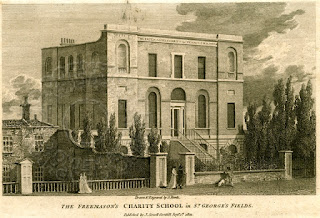 
Posted by kleverkloggs at 2:02 PM No comments: