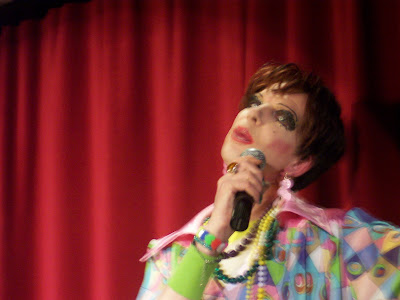 Oh dear, well I have fretted long and hard on the ethics of filming and then posting on the net, the performances of another.

This is starting to look like a David Hoyle stalking blog, and when I was tackled last night, by the Divine David as to just what was I planning on doing with the footage, I was looking forward to posting his response on the net.

I stupidly assumed that my new camera would automatically be an improvement on the last one one, only to find the clip sounded like it had been recorded down a well, though several blankets and with a bucket over David Hoyle's head. After 6 hours to edit the clip from his series, for youtube, and now considering on embarking on sound engineering [well it looks so easy on CSI] I am begining to think Mr Hoyle's styling of the Royal Vauxhall Tavern as a "media-tech" is the literal truth

With the amount of photographs taken during his show, I often think of those dodgy camera clubs they apparently had in 50's Soho, you could enter and hire a nude model, and it was up to you whether there was actually any film in the camera during the session. I guess anything I have taken, or posted probably contradicts Mr. Hoyle's desire to be elusive. Could he disappear for another 7 years or more?

Anyway it's "The INTERNET" next week. 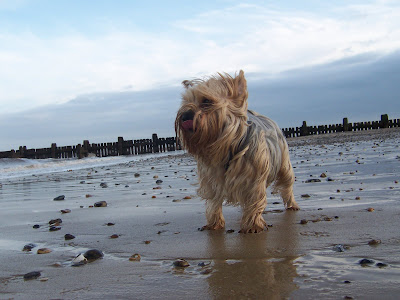 And here's a picture of one of my dogs I uploaded by mistake.
Posted by kleverkloggs at 10:09 AM 1 comment: